nofollow
back to www.ghacks.net
Save big on air all summer long with this personal air conditioner
Give $10, Get $10
Get $1 credit for every $25 spent!
Ending In:
$79
68% off
Ending In:
wishlist 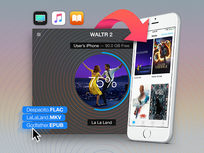 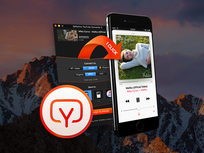 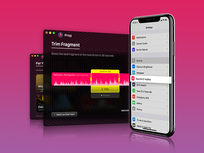 If you want to move a file, whether it's a video, ebook, ringtone, or other media file, from your computer to your iPhone, you'd usually need to use iTunes. WALTR 2 allows you to skip converters, iTunes, and wires altogether. At its core, WALTR 2 is a simple file manager where you can drag-and-drop any music, ringtones, videos, PDF, and ePUB files into any Apple device without iTunes or external apps. It's also armed with clever tricks like automatic file conversion for audio and video, and content recognition that brings along metadata. As a bonus, WALTR 2 goes beyond iOS devices, supporting the entire lineup of Apple iPods, starting with the original iPod Classic, built in 2001.


100+ mentions around the Globe including Macworld, Gizmodo, Forbes, CNET, and more!

"WALTR 2 is an excellent tool to get media files onto your iOS device quickly, and to no longer worry about unsupported formats." – MacWorld

"If you regularly transfer your own files -- WALTR 2 could make your life a lot easier." – Forbes

"WALTR 2 ... allows users to quickly upload video files to their iPhone that aren't supported by iTunes, such as FLAC and MKV files. It just does it in some magic way." – Engadget

"WALTR 2 Simplifies Sending Any File Type to Your iPhone or iPad Wirelessly." – LifeHacker

No Wi-Fi, No Problem! You Can View All Your Favorite YouTube Videos & Music Offline with This App

YouTube is a massive video and music library, but its only significant flaw is that you need internet access to use it. Well, not anymore. Softorino YouTube Converter 2 lets you quickly download any YouTube video to your Mac's desktop or other Apple devices, so you can watch it offline and without the stop-and-go loading that comes with spotty viewing. Unlike other Youtube converters, Softorino goes beyond videos and music, as it can even turn any YouTube video into a timeless iPhone ringtone.

Ringtones, your iPhone, your PC, and iTunes. One of these things is not like the others; one of these things just doesn't belong. Because transferring ringtones into iPhone using iTunes can be frustrating, Softorino launched iRingg – a revolutionary solution to let you not only drag and drop ringtones into iPhone… But also have fun with creating unique ones. If you ever need to get a custom ringtone into your iPhone, then iRingg should be an insta-buy. It's an iPhone ringtone studio, iTunes alternative, and everything in between.


"It’s super-easy to use, works rather fast, and includes support for YouTube, which is without a doubt the best source of songs and audio files for a ringtone." – Softpedia

"The [Mac] app’s most essential feature is the conversion of audio files into a ringtone-ready, iPhone-compatible format. This part is totally automatic. iRingg just fixes up the music without you having to do anything." – Cult of Mac